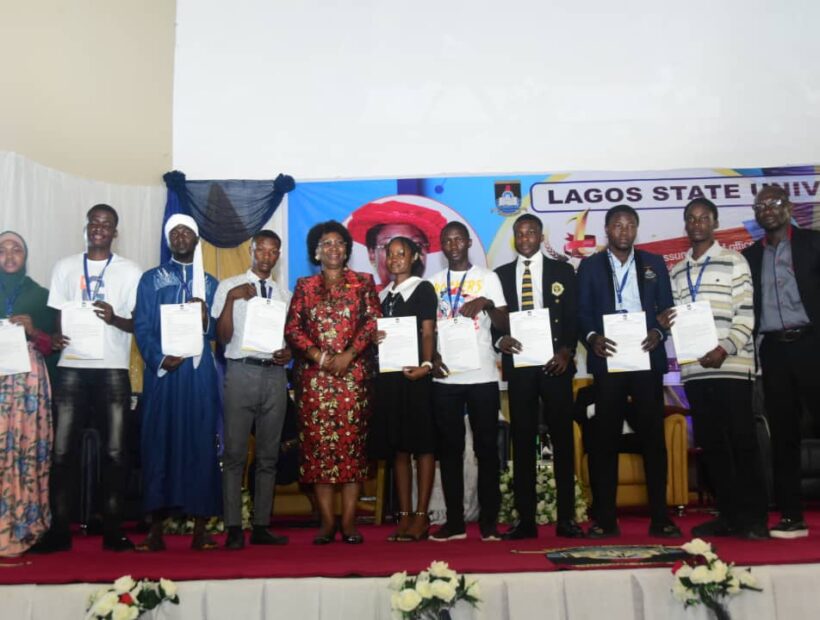 The Vice-Chancellor of the Lagos State University (LASU), Professor Ibiyemi Olatunji-Bello on Tuesday announced a 50% refund to 556 students with First-Class Cumulative Grade Point Average from different departments at the undergraduate level.

This is coming as part of activities marking her first 12 months in office as the 9th substantive Vice-Chancellor of the 39-year-old university.

At the ceremony which was held at the Buba Marwa Auditorium, Professor Ibiyemi Olatunji-Bello made a symbolic scholarship certificate presentation to 11 of the 556 winners.

She said the scholarship award which is in fulfillment of her promise when she became the ninth substantive vice-chancellor of the university a year ago is simply to reward excellence and also encourage healthy competition among students of the institution.She explained that while those in graduation class among them would get the refund in cash, their juniors would have theirs as roll-over rebates on their school fees for the next academic year.

She noted that students with a perfect score of 5.0 CGPA would enjoy the gesture as long as they maintain their First Class grade till graduation.

Speaking about her vision to make the university the best brand in West Africa by 2026, the VC said her administration instituted a six-cardinal goal toward the realisation of the vision and pursuing it vigorously.

She said the vision, which is hinged on the tripartite mandates of the university, just like every other university, which are quality learning, research and community services, is on course and with her team and God on their side, it would be achieved on record time.

She congratulated all the scholarship winners and urged them to remain committed to their studies.

Speaking on the lingering strike that has rendered learning in public universities comatose, the VC lamented that the incessant industrial action by the Academic Staff Union of Universities(ASUU)  has dragged on for up to seven months and still counting.

She regretted that the unending industrial action has greatly had a huge destructive toll on the nation’s tertiary education and the economy as a whole.

She called on both the Federal Government and the striking lecturers to reach a compromise on their differences to enable academic activities to resume across the nation’s public universities.

In her remark, the wife of Governor Babajide Sanwo-Olu, Mrs. Ibijoke Sanwo-Olu, who was the chairman of the event with the vice-chancellor’s husband and Lagos state Commissioner for Environment and Water Resources, Mr. Tunji Bello, in attendance, commended the effort of Prof Olatunji-Bello, particularly as regards the huge achievement her administration had been able to make within one year.

She said the achievement which includes sustenance of peace, students’ academic excellence, winning of laurels and research grants by faculty members, among others showed that the vice-chancellor understood what the office of a vice-chancellor meant.

Represented at the event by Mrs. Nkem Sofela, Mrs. Sanwo-Olu had before the lecture inaugurated some projects done by the administration of Olatunji-Bello, which included a Bakery, Staff Clubhouse and a two-block Skill Acquisition Centre even as she wished her well as she journey on in the office. She said she is proud of her.

Earlier in his lecture, the British Deputy High Commissioner to Nigeria, Mr. Ben Llewellyn-Jones stressed the importance of quality education to citizens particularly to girl-child as a means to lift many out of hunger and poverty.

Speaking on the topic of the event, “The significance of education to the growth of a nation,” the envoy said the UK government has been supporting Nigeria’s education at various levels and in various ways and will continue to do the same for the country.

He said education is a right and not a privilege but that it is unfortunate that the high level of insecurity and conflict occasioned by terrorism and kidnapping that the country is experiencing daily have put many school-going-age children away from classrooms.

He said the situation which affected the northern part of the country more than the southern part is a sad one for a country like Nigeria with a low-income index.

She emphasised that the UK government would continue to support Nigeria’s education in every way possible.