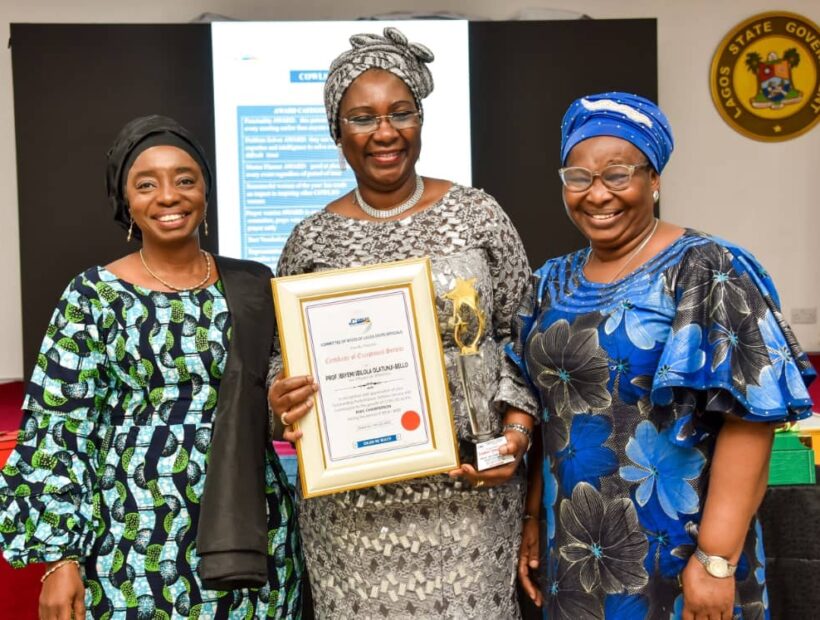 …Also gets certificate of Exceptional Service
Less than forty eight hours after she was named the Higher Education Administrator of the Year, 2022 at the National Education Summit and Awards, Lagos State University Vice Chancellor, Prof. Ibiyemi Ibilola Olatunji-Bello, mni, has been honoured with the Resourceful Woman of the Year award by the Committee of Wives of Lagos State Officials (COWLSO).
Alongside the award, Prof. Olatunji-Bello also received a Certificate of Exceptional Service at the Body’s 2021 Awards and Recognition Ceremony, which took place on Tuesday, 19th July, 2022 at the Banquet Hall, Lagos House, Alausa, Ikeja, under the distinguished chairmanship of Dr. (Mrs) Claudiana Ibijoke Sanwo-Olu, the First Lady of Lagos State.
The professor of Physiology and second female Vice Chancellor of the university was praised by her colleagues at COWLSO for her leadership acumen, outstanding performance, selfless service and contributions to the growth of the Body when she served as the National Working Committee (NWC) Chairperson between 2019 and 2020.
The excited mother of three and grandmother, having received the award, urged her colleagues to shun eye service and embrace diligence by doing their best in whatever they find themselves doing as someone is always watching. She dedicated her award to all members of the Committee, their children and grandchildren.
Deputy Vice Chancellor, Administration, Prof. Adenike Boyo, was at the event with the VC.
VICE CHANCELLOR’S EID KABIR MESSAGE
PROF. OLATUNJI-BELLO’S CV SWELLS AS SHE BAGS COWLSO AWARD OF RESOURCEFUL WOMAN OF THE YEAR