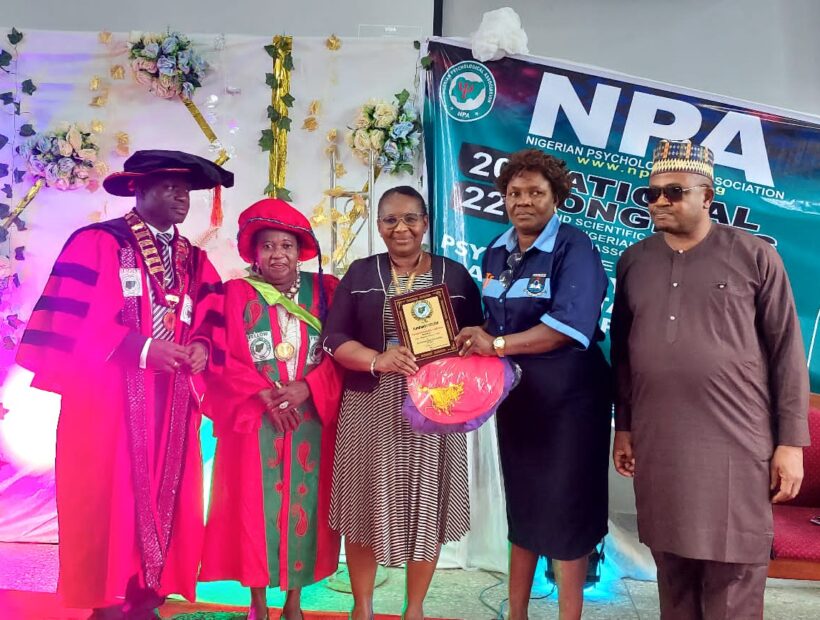 The Nigerian Psychological Association (NPA), on Wednesday, honoured the Vice Chancellor, Prof. Ibiyemi Olatunji-Bello, mni, with a Honorary Fellowship award of the Body.

The Fellowship Award was conferred on the VC at the Opening Ceremony of the
2022 Congress and Scientific Conference of the Body, which held at the Aderemi Makanjuola Lecture Theatre, main campus, Ojo with Psychological Association professionals around the country, present.

According to the National President, NPA, Prof. Afolabi Olukayode, Prof. Olatunji-Bello was honoured for her contribution to the study of Psychology in the university and the nation as a whole.

The Vice Chancellor, who was represented by Deputy Vice Chancellor, Administration, Prof. Adenike Boyo, expressed her appreciation at the honour and dedicated it to the entire LASU community.

Earlier in the day, the NPA National President, Prof. Olukayode led members of the National Executive Committee of the Association on a courtesy visit to the Vice Chancellor, Prof. Ibiyemi Olatunji-Bello, mni, at her office on the sixth floor of Babatunde Raji Fashola Senate Building, main campus, Ojo.

At the visit, Prof. Olukayode praised the VC for giving special attention to the Psychology department of the university with the construction of a Psychology lab, the best in the country.

He thanked the VC for the hospitality that the delegation had received so far and it to that which he also received several years ago when the Association held first scientific conference.

The Dean, Faculty of Social Sciences, Prof. Olufunso Omobitan, led the National Excos alongside senior academics in the Department of Psychology to the courtesy visit.

The clerics were at the VC’s office to pay her a courtesy visit on the sidelines of LASU PRAYS, a prayer programme organised by the muslim community in the university to pray for the institution. They were led to the VC’s office by the Chief Imam of the LASU Central Mosque, Prof. Amidu Sanni and his deputies.

Sheik Abdulrahman Ahmad, in his brief statement expressed his admiration for the Vice Chancellor for her liberality and tolerance for other religions despite her Christian faith. “We have become so divided and religiously intolerant as a people, so much that when you have someone of the other religion being in a position, you are initially apprehensive. But when I was told that you (VC) encouraged the Muslim Community to hold the LASU PRAYS programme, I was surprised and happy. Becuase of you, my hope in the unity of the country is renewed. This is how it should be; this is a thing of joy.”

The Vice Chancellor, Prof. Olatunji-Bello, in her response, said the institution belongs to people of all faiths and that she doesn’t discriminate against any religion.

“In LASU, there is no difference between Muslims and Christians; as far as I am concerned, I see you as a staff or student, not as a Muslim or Christian. I believe in prayers and that is why we are organising the LASU Prays. I enjoin you to pray for peace and prosperity for all members of our university community, and for the attainment of our vision to become the best university in the West Africa Region”, she said.

Sheik Abdullahi Akinbode, the Al-Jamaly Society of Nigeria spiritual leader led prayers for the management and the university.

The visit had in attendance members of the university management and aides to the Vice Chancellor.