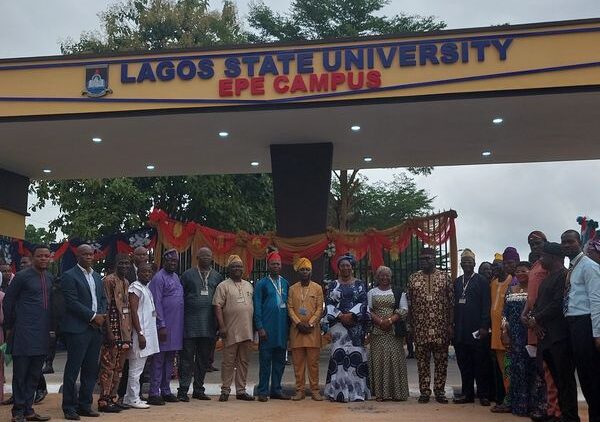 This is the first of its kind in our 26-year history – HoC, Prof. Okuneye
The wind of rapid development sweeping through the Lagos State University, under the administration of the 9th substantive vice chancellor of the university, Prof. Ibiyemi Olatunji-Bello, mni, has touched the Epe campus of the university with the opening, on Friday, of the Iraye Gate, which will now serve as the main gate of the campus.
The vice chancellor, who was welcomed by joyous staff and students of the campus, led by Head of Campus, Prof. Rafiu Okuneye, expressed excitement at the enormity of the reception given to her at the opening ceremony, stating that construction of the new gate is just one of the many developments that the campus would witness in the months ahead.
“I didn’t plan for us to have a formal opening of this gate, but the Head of Campus convinced me that it’s worth the while, and from what I see today, I agree with him 100 percent”, she began her address.
“When I came here last year and earlier this year, I observed the problems of encroachment and trespass that we are having with communities around and we agreed that it was neccessary to fix our perimeter fence and have a befitting gate.
“With the construction of this gate, the community will also benefit because we will push to have the road and drainage that leads here to be fixed for them. We are also working to continue the construction of our perimeter fence, which we started but stopped along the line. We are still negotiating and consulting and by God’s grace, it will be done soon”, she explained to the cheering crowd.
She further announced her administration’s plan to bring a new faculty, faculty of Environmental Sciences to the campus even as she revealed that approval for the new faculty of Engineering building has been sought.
“The faculty building for Engineering and that of Environmental Sciences have been submitted to the governor and we are hoping that very soon, work would start”, she said, before formally opening the gate to the glory of God and use of mankind.
The HoC, Prof. Okuneye, in his brief address, stated that the new gate was the first of its kind in the history of the campus. He said: “This campus has been in existence for over 26 years, but this is the first time we will be having a befitting gate and gate house for the campus. Across all the campuses of the university, the VC has established a pleasant working environment and that is why you see the rate of progress in the university. We thank her for her special interest in this campus.”
Dean, faculty of Engineering, Prof. Raji; Deputy Director, Works, Engr Salami Solomon; Head, Security Unit, Mr. Sunday Adeyeye and the students representatives spoke in glowing appreciation of the vice chancellor. Mr. Salami’s statement was particularly interesting. He said: “This project is one the proposals we have been making for over a decade. I thank you because you promised that it will be done and today, in just some months, we are opening it. Thank you ma.”
Acting dean, School of Agriculture, Prof. O.T.F Abanikanda was also on ground to receive the VC, members of the university management, and other senior officials of the administration who joined the ceremony.